My boys have been a little obsessed about the homeless lately. It started with a raccoon. 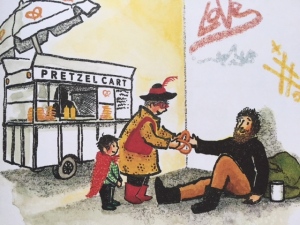 Nana and her grandson.

My husband took the trash out one night and found a raccoon peering out of the garbage can. He reported on this the next morning. The following night, he looked out the window and saw a deer sitting in our backyard. He was afraid it was injured and was relieved to find it gone in the morning.

A few mornings later, he asked us, “Guess what I found in the yard last night?”

We never could have guessed but he found a man passed out on our side porch. This is our tenant’s entrance so Eddie made him get up and move.

The boys were perplexed. “Why was he there?” Questions, questions.

“Well, he could be homeless,” I said.

“What is HOMELESS?” they screeched.

I tried to explain that some people don’t have a place to live. This is a hard concept for two five-year-olds to understand. But it’s important to be honest. I told them there are ways to help people that aren’t as fortunate as us and we can help by volunteering. 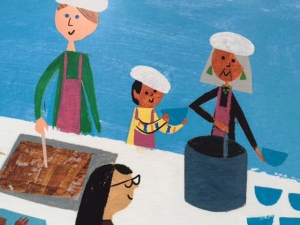 CJ and his Nana.

I’ve tried to introduce the concept of volunteering in the past. The first time Max said, “I think when I’m a grownup I’m going to be too busy working to volunteer.”

“Some companies WANT you to volunteer, “ I explained. “They want you to help people.”

“I don’t know,” he said doubtfully, from the backseat of the car.

This time he listened. Two books about grandmothers helped me with this hard conversation.

First, we talked about the great book Nana In The City by Lauren Castillo. The boy in the story goes to visit his Nana. He doesn’t like her city. It’s too loud, big, and scary. The scary includes people asking for help on the streets.

Nana solves the problem by knitting the boy a cape and showing him the wonders of the city. This includes buying a pretzel for one of the people on the street.

We bought this book because it has a bus in it (Calvin’s obsession) but it also has a great message. CJ and his Nana take the bus every week to a neighborhood with “crumbling sidewalks and broken-down doors, graffiti-tagged windows and boarded-up stores.”

CJ resists this journey but his Nana points out the beauty around them. Their destination is helping at a soup kitchen where CJ is happy to see familiar faces.

I told the boys this is how we can help sometime; we can volunteer by helping people who need food.

I’m sure it will be an ongoing conversation. They notice people as we drive around the city, asking for help. They’ve asked me about volunteering.

The other day, we were in the parking lot of their dad’s business and they noticed a gray, scrawny one-eyed cat.

“Look, Mama! A homeless cat,” they yelled, while running to “help” it.

Here are some resources for helping the homeless.

6 thoughts on “Talking to my kids about the homeless”