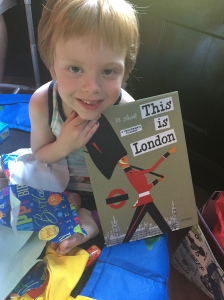 Calvin and a birthday book.

Most kids (and adults) like hearing their birth stories. For my twins, it’s mostly the story of how Calvin got things started and that they were born eight minutes apart.

My husband Eddie and I thought they sounded like goats.

Indulge me. It’s been the best and hardest six years of my life.

Legos, Star Wars figures, buses, games, and an abundance of other gifts were involved in the birthday celebration and of course, there were books.

We had to have a conversation before their family party.

If you don’t like something DON’T SAY IT, Eddie and I advised. Just tell us later.

Kids. They have the charming, horrifying habit of telling the truth.

On to the books –  Calvin received two London books: This is London by Miroslav Sasek and We Completely Must Go to London by Lauren Child.

For Max, more Star Wars Yarns (see a prior post) and Ed Emberley’s Big Purple Drawing Book. Max loves Emberley’s books and has checked the Purple one out several times from the library. The appeal of this one is it teaches you how to draw a pirate ship.

Max and our other birthday boy, Baby Cecil.

Later, as Max and I read one of his new books he confessed.

“This is one of the things I didn’t like but didn’t say. But now I LOVE this book!”

Score one for parenting!

We have another birthday boy in our family. Cecil, or Baby Cec as my boys called him, turned one this month! Named after my husband’s father, he is our great nephew.

Baby Cec had to have a book too. I chose Chicka Chicka Boom Boom by Bill Martin Jr. and John Archambault, illustrated by Lois Ehlert.

I learned of Chicka when I interviewed my friend Erin for this blog. My boys knew about it from preschool and would chant along with it, much to my surprise. This classic provides a sing songy way to learn the alphabet.

Here’s to September birthdays! And reading! And cake!

(About the cake – Max had Darth Vader on his cake; Calvin a MegaBus; and Cecil a Teddy Bear.)

More books suggestions
Thanks to our family and friends for the following books.

Danny and the Dinosaur by Syd Hoff

Tacky the Penguin by Helen Lester

When I Grow Up by Weird Al Yankovic and illustrated by Wes Hargis.

And thanks to all my new subscribers! 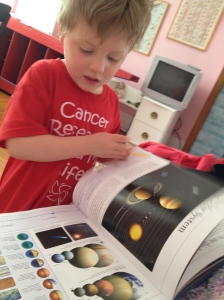 What’s one thing you feel good about as a parent? For me, one thing I’ve done right is that my kids love books.

(I remind myself of this after I lose it and yell. Right after the guilt sets in.)

Here are some ways I’ve gotten my boys interested in books.

Ok, so sometimes, it doesn’t work.

Here’s what I hear:

So, I try some new things.

They know I read a lot and see my books.  They’re aware I have a blog and I try to get their ideas for it and say, “Hey, can we read this book? I might need it for my blog.” They love that.

For the most part all of this works. The other night, when they should have been sleeping, the three of us lay in my bed, each looking at our own book. They’ll ask me about what I’m reading. I also find books in their beds when it should be lights out.

This makes me happy.

But of course, sometimes they just want to watch TV.

My boys have been a little obsessed about the homeless lately. It started with a raccoon.

Nana and her grandson.

My husband took the trash out one night and found a raccoon peering out of the garbage can. He reported on this the next morning. The following night, he looked out the window and saw a deer sitting in our backyard. He was afraid it was injured and was relieved to find it gone in the morning.

A few mornings later, he asked us, “Guess what I found in the yard last night?”

We never could have guessed but he found a man passed out on our side porch. This is our tenant’s entrance so Eddie made him get up and move.

The boys were perplexed. “Why was he there?” Questions, questions.

“Well, he could be homeless,” I said.

“What is HOMELESS?” they screeched.

I tried to explain that some people don’t have a place to live. This is a hard concept for two five-year-olds to understand. But it’s important to be honest. I told them there are ways to help people that aren’t as fortunate as us and we can help by volunteering.

CJ and his Nana.

I’ve tried to introduce the concept of volunteering in the past. The first time Max said, “I think when I’m a grownup I’m going to be too busy working to volunteer.”

“Some companies WANT you to volunteer, “ I explained. “They want you to help people.”

“I don’t know,” he said doubtfully, from the backseat of the car.

This time he listened. Two books about grandmothers helped me with this hard conversation.

First, we talked about the great book Nana In The City by Lauren Castillo. The boy in the story goes to visit his Nana. He doesn’t like her city. It’s too loud, big, and scary. The scary includes people asking for help on the streets.

Nana solves the problem by knitting the boy a cape and showing him the wonders of the city. This includes buying a pretzel for one of the people on the street.

We bought this book because it has a bus in it (Calvin’s obsession) but it also has a great message. CJ and his Nana take the bus every week to a neighborhood with “crumbling sidewalks and broken-down doors, graffiti-tagged windows and boarded-up stores.”

CJ resists this journey but his Nana points out the beauty around them. Their destination is helping at a soup kitchen where CJ is happy to see familiar faces.

I told the boys this is how we can help sometime; we can volunteer by helping people who need food.

I’m sure it will be an ongoing conversation. They notice people as we drive around the city, asking for help. They’ve asked me about volunteering.

The other day, we were in the parking lot of their dad’s business and they noticed a gray, scrawny one-eyed cat.

“Look, Mama! A homeless cat,” they yelled, while running to “help” it.

Here are some resources for helping the homeless.

My book club and I are gaga for Ann. (Center. In the DRESS.)

I took my blog on the road last week. On my way to the Tribe Conference in Franklin, Tennessee my fellow writer and friend Melissa and I stopped at Parnassus Books. The store is a literary mecca in Nashville, Tennessee.

Author Ann Patchett is the co-owner of the store. She’s also the author of my book club’s first read Truth and Beauty. We celebrated our tenth anniversary and love of all things Patchett by hearing her speak at the Cincinnati Mercantile Library’s Niehoff lecture in October.

May I digress? Ann talked about the importance of independent owned bookstores. We met her during the cocktail hour and she shared that her fabulous dress was a gift from her friend Liz (author Elizabeth Gilbert). We smiled, gushed, and probably spit like teenagers with braces when we told her that we love her work. She was gracious, engaging, and an intriguing speaker.

I try to make it a point to hit independent bookstores when traveling with or without my boys. I found some gems at Parnassus. It has a beautifully stocked and comfortable children’s book section.

For Calvin I found, The Queen’s Hat by Steve Antony. Calvin has an obsession with buses and cities. His beloved London double decker buses and London Bridge feature large in this tale about the Queen losing her hat on the way to visit a certain baby. (Can you guess?)

Calvin also scored This is San Francisco by Miroslav Sasek. This was gold, pure gold, since we were there in June (see my blog post California Love) and he adores Sasek’s This is New York.

Max loves all things Star Wars these days. He was happy to get Star Wars Epic Yarns: The Empire Strikes Back and Star Wars Yarns: A New Hope by Jack Wang and Holman Wang. These clever books show Star Wars figures made of yarn and the one word a page are great for new readers. 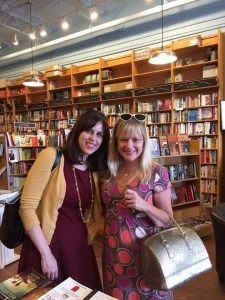 Melissa, me, and my gold handbag visit Parnassus Books.

The Tribe Conference (for writers, bloggers, and entrepreneurs), the bookstore, and a little time away from my two kindergartners left me feeling inspired!

Ps. At the conference we were challenged to ask for email addresses for our blogs. I got around 60! Thank you to all who responded!

Where to find the books and other info

Check out your local bookstore or library for all the titles mentioned above or visit Powell’s City of Books for the The Queen’s Hat, and This is San Francisco.

Star Wars Epic Yarns: The Empire Strikes Back can be bought from Chronicle Books.

Elizabeth Gilbert will be at Parnassus Books on October 21 with her new book, Big Magic.